Donovan Beard has been the Owner & Lead Instructor of Defensive Firearms Instruction since 2011 and a Firearms Instructor since 2004. He served over 4 years in the US Marine Corps and was deployed to numerous countries in the Middle East and throughout Europe and Africa. 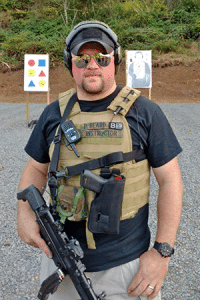 During his time in the Marine Corps he was deployed to Iraq where he operated as a military police officer.

Donovan provided security for logistical convoys traveling throughout the Al Anbar province as well as providing security for Explosive Ordnance disposal teams while they defused IED’s and dealt with weapons caches.

Shortly following that he was deployed with the 24th Marine Expeditionary Unit (MEUSOC) where he took part in the American evacuation of Beirut, Lebanon in 2006.

He also cross trained with NATO forces in Jordan, Pakistan and Kuwait as well as spending time in the Horn of Africa and Southern Europe.

Upon returning from that deployment he spent the rest of his time as an instructor in and around Camp Lejeune, North Carolina.

During this time he specialized in training individuals in the use of rifles, pistols, shotguns and machine guns with an emphasis in the M.O.U.T. Training program (Military Operations in the Urban Terrain) and the EMP Training program (Enhanced Marksmanship Program).

After leaving the Marine Corps he started working as a Federal Security Contractor where he provided security services for various Federal Installations around the state of Oregon.

In 2011, Donovan founded Defensive Firearms Instruction with a goal to be the “industry standard” when it comes to educating members of the public as well as Security Professionals in the safe use of Firearms and other less lethal weapons.

He currently works closely with the Oregon Department of Public Safety standards and Training (DPSST) Private Security / Private Investigator program as an instructor and an advocate for security professionals throughout the state.

Donovan states, “I think that being a firearms instructor is probably one of the most important jobs in our community especially when it involves teaching people about how to use firearms. I take my job very seriously because in many cases the training my students receive might be the only formal training they get before they have to make a decision that will change their lives forever.”