Logan Nichols is a contract instructor for Defensive Firearms Instruction. 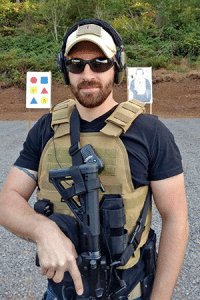 During his time with the US Navy, Logan was a Master at Arms (naval Military Police) attached to a Naval Coastal Warfare unit where he specialized in maritime security.

Logan was a combat boat operator as well as a Fire Team Leader where he led groups of sailors operating on a boat team.

During this time he became proficient in the use of various small arms, Communications Equipment, Navigation Equipment as well as higher-level medical training.

In addition to this, he provided close protection to individuals being transported from ships to other destinations.

Logan worked overseas in the Helmand Province of Afghanistan as a private security contractor.

He operated on a PSD team completing assignments such as Executive Protection and transportation details for clientele with high threat levels.

Logan states, “I truly believe what we do here makes a difference. I want people to leave our classes with a high level of confidence, and to know what they are doing in a professional sense. We owe that not only to our students but to our community as well.”