Sergeant Tariek Leith is currently serving in his eighth year as a United States Marine assigned to an ANGLICO unit as a Supporting arms Liaison Team Chief. Where he has been deployed to the Middle East and numerous countries throughout Europe. 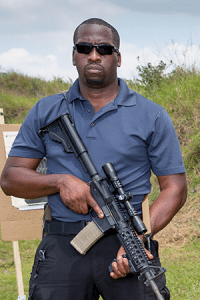 Earlier in his career Tariek spent four years as a Field Radio Operator on a Fire Control Team (FCT) responsible for essential radio communications between his unit and fires assets.

Later he became a Scout Observer on a Fire Control Team (FCT) responsible for the safe, observation and routing of Air, Ground and Naval Fires Assets and their employments.

Finally, he was assigned as the Supporting Arms Liaison Team Chief (SALT) responsible for the training and well-being of the Marines under his care as well as providing comprehensive fire support, coordination, and communication capability plans to higher echelons.

As a private contractor for Invictus Security and business owner of Tri-Star Solutions PLLC Tariek’s experience with executive protection and as a personal protection agent spans across the United States and on foreign soil, where he has been sought after to protect members of the fortune 500, military and government personnel as well as their families, balancing the need for professionalism while also making families feel at ease when having added security needs.

Tariek states: “An instructor’s credentials do not make him great, his ability to train each student at their own individual aptitude level is what makes them great. No matter what level of instruction received a student should walk away with at least one positive skilled learned.”